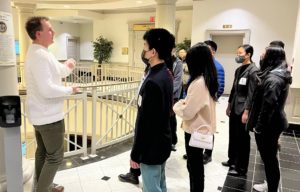 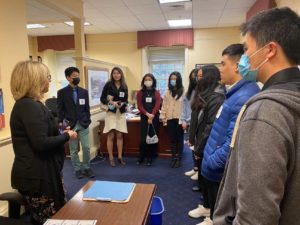 Senator Hester represents Maryland District 9 which covers western Howard County and part of Carroll County. “I am impressed with what the CAPA Youth volunteers have done for the community in Howard County. The summer interns from CAPA have done a wonderful job and some are still working for me.” Said Senator Hester, who welcomed the students outside the Senator Chamber from a very busy schedule. The group thanked her for the invitation.

Speaking of her current work, Senator Hester highlighted the issue of cyber security and explained how the recent geopolitical tension in Ukraine has made cybersecurity a high priority for Maryland’s local governments. She indicated that the current legislative session ending on April 11 is very intensive with a big number of bills.

Prior to meeting with Senator Hester, the group was greeted by the Senator’s team members and visited her office in the Senator’s Office Building. Judy Guerrieri, Legislative Aide, provided an overview of the whole team’s daily responsibilities and how the annual legislature season worked. Brandon Engle, Chief of Staff, gave the group detailed information about the bills that Senator Hester has been working on. She is currently co-chair of the Maryland Cybersecurity Council’s Ad Hoc Committee on State and Local Cybersecurity.

The group also sat in the hearing meeting of the Education, Health, and Environmental Affairs Committee, where Senator Hester is one of the eleven members. In addition, the group watched the voting session in the Senator Chamber, the day’s last work item for the senators.

During the session, the announcer on the Senate floor praised the CAPA Youth, receiving warm applause across the floor. When the session ended at nine, Senator Hester commented, “Yes, it is very long and tiring, but we feel good doing what is right for the public.”

The visit ended with a guided tour of the State House, which includes the 18th Century section and the 20th Century Annex. The Old Senate Chamber was where George Washington announced his retirement as Chief-in-Command in 1783. The CAPA group left with a deep appreciation of the senators’ dedication to public service and the operation of the senator session. 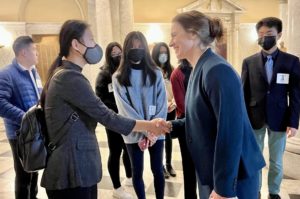 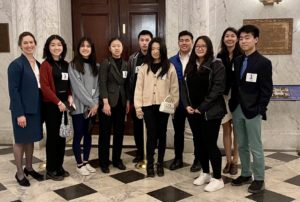